The Art Institute of Chicago Brings Monet to the City

There is something so incredibly special about Claude Monet’s work. Unlike most French Impressionists, Monet didn’t embody the Parisian flâneur like Edgar Degas or Gustave Caillebotte. He was not interested in the objectivity and devotion to contemporary life but taken with the natural forms of the world. Monet was fascinated by light and worked “en plein air” to accurately capture the moment when light and color intertwined. In the absence of shadows, Monet placed an emphasis on color rather than dimension, to “not render landscape, but the sensation produced by landscape.”

Unlike past exhibitions and current installations of Monet, The Art Institute of Chicago brings Monet to the city. The Impressionist style was seen as a manifesto against bourgeois manners and hoped to represent bohemian freedom through loose brushstrokes and illustrations of nature. Claude Monet’s work depicts a myriad of natural landscapes, organic forms and romantic scenes which create an interesting juxtaposition with its environment: the walls of the museum.

This particular exhibition places the artwork in the context of its surroundings. Even though it’s common for Monet’s work to be discussed in the context of the French Impressionists and the city of Paris; the viewer is confronted with the mass popularity of Monet in Chicago, a city which seems so removed from the artist’s origins. In 1888, Monet first appeared in a Chicago gallery as a part of the last Inter-State Industrial Exposition, also known as the American Salon. In 1891, Bertha and Potter Palmer collection “acquired some 20 paintings by Monet—including several from the Stacks of Wheat series—a fraction of the 90 canvases they would come to own” and the Chicago collectors which quickly followed suit.

The Art Institute of Chicago holds the largest Monet collection outside of Paris. In “Monet and Chicago,” beloved major works and rare still lifes, figural scenes, seascapes and landscapes are on display in the temporary exhibit. Here, visitors are not only becoming familiar with un-seen works, but they are also engaging in a scientific study of Monet’s materials, techniques and processes which can only be seen thanks to new art-historical research.

Amongst the numerous galleries of work, Monet’s “Stacks of What” series exhibit’s the artist’s mastery of light and capturing of natural forms. It’s a cyclical series of time, seasonally and daily. Depictions of specific moments in time such as the “End of Summer,” “End of Day, Autumn,” and “Sunset, Snow Effect” depict the same subject but placed in a different spot on the yearly timeline. The comforting glow of yellows, blues and pinks radiate serenity and peace especially during the time and place in which we are all living in now. 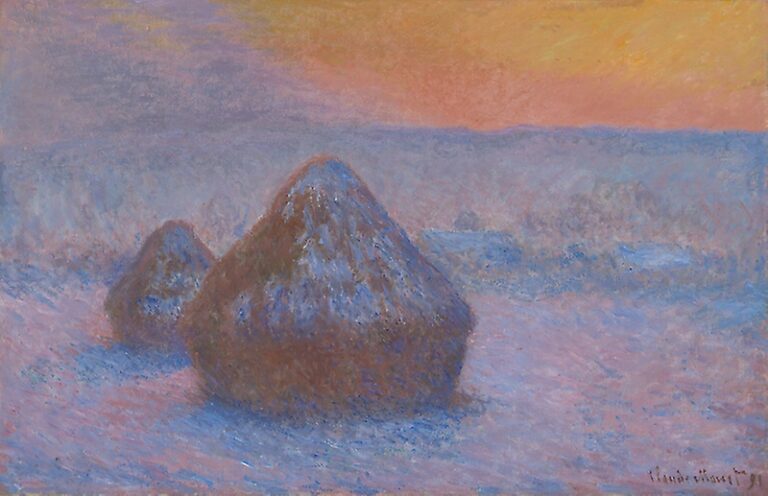